“There is no prodigy in our profession. If you see all the great singers of the past, none of them are.” – Luciano Pavarotti

Often than not, we would come across Youtube videos or TV shows featuring young instrumentalists whom displayed amazing talent. One such example can be seen here where Anke Chen, age 5, was seen munching away Clementi Sonatina with ease.

Recently, eleven years old Chloe Chua took the Singapore Arts scene by storm when she won the first prize in the junior division of the Menuhin Competition. When she was four years old, Chloe joined the Nanyang Academy of Fine Arts’ School Of Young Talents Gifted Young Violinist Preparatory Course. Her award-winning talent had seen her place first at the Andrea Postacchini International Violin Competition in 2017 and the Thailand International String Competition in 2015. Her father works in the food and beverage sector and her mother is a piano teacher. She is the only child.

One of the world’s leading horn player, Barry Tuckwell, was appointed principal 3rd horn with Melbourne Symphony at age 15. After studying the piano, organ and violin as a chorister at St Andrew’s Cathedral, Sydney, Tuckwell was introduced to the horn at age 13, and was playing professionally within six months. He went on to take on numerous orchestra appointments, such principal horn with the London Symphony Orchestra, before embarking on a successful career as a recording horn soloist with over 50 recordings and 3 Grammy Award nominations.

Kelly is one of America’s fastest rising musician, singer, entertainer, songwriter and arranger. She released her first CD album at age 12. Other early highlights of her career include appearing as special guest artist with Boston Pops Orchestra at age 14, and invited by Wynton Marsalis to perform for then President Barack Obama at age 15. By age 18, she had already released her sixth album. She first picked up the saxophone at age 9, and was already performing in public 6 weeks later.

Peter Moore was appointed Co-Principal Trombonist of the London Symphony when he was just age 18. He was also named BBC Young Musician of the Year in 2008 at the tender age of 12. His incredible talent had already developed into a beautiful blend of artistry and technique. He started playing the baritone horn at age 5 and moved on to the trombone at age 7. Within months he had been crowned Northern Ireland’s primary school musician of the year. He completed his Grade 8 trombone exam with distinction at 10 and earlier this year won a best soloist title at the entertainments section of the French Open.

Drucker began clarinet studies at age 10 with Leon Russianoff, his principal teacher. He was appointed Principal Clarinetist of the Indianapolis Symphony Orchestra at age 16, the Adolf Busch Chamber Players at age 17, and the Buffalo Philharmonic at age 18. By age 19, he was appointed Principal Clarinet of the New York Philharmonic and went on to complete 60 years of lustrous playing before retirement. To hold a high pressure position for 60 years in an Orchestra as high status as the New York Philharmonic is a phenomenal track record, especially when Drucker has been the most called upon in-house soloist. 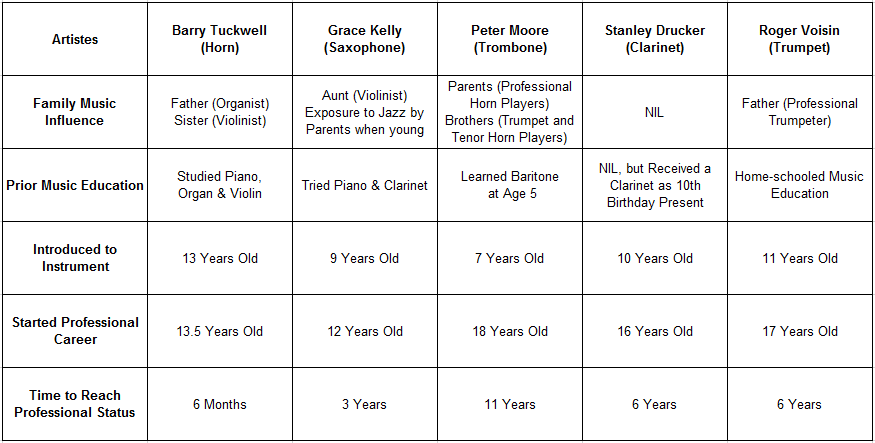 While the above data is not conclusive by any means, it does reveal the importance of exposing music education to aspiring professionals at a fairly young age. The runway to becoming a professional is short, ranging from 3 months to 6 years. While Peter Moore took 11 years before becoming the Co-Principal of London Symphony Orchestra, he was already performing at a professional level prior to that.

What we can observe is also that most wind instrumentalists begin their training on the wind instrument at a later age as compared to their strings and piano peers, but their progress to professional appointments tend to be faster too.

Perhaps this is also why the Singapore National Youth Orchestra has a special programme for talented pianists to master a second instrument (ABRSM Grade 6 at age 10). As we continue to concoct the formula for developing wind instrument prodigy, let us continue to provide the environment necessary for everyone to develop their love for wind music making.

“Hard work, and not the prodigy label, ensures success. I may have progressed faster than others, but I’ll have to keep it up in the future and become more than just a prodigy… because the label won’t last me a career.” – Ning Hui See, Concert Pianist