Touring the World with Kahchun Wong Rapidly rising through the ranks of the musical world, it is almost impossible to catch a glimpse of homegrown conductor Kahchun Wong in Singapore as he is currently of high demand with orchestras worldwide.

After winning the Mahler Competition in May last year, it has since opened up many opportunities for him, starting with a personal invitation by Chinese music director Yu Long to replace the Spanish maestro Jesus Lopez Cobos for three highly spotlighted concerts with the China Philharmonic, Shanghai Symphony and Guangzhou Symphony.

This was followed by an invitation by Gustavo Dudamel to be his assistant conductor at the Los Angeles Philharmonic for the 2016/2017 season. Kahchun then made a last-minute step-in for an indisposed conductor with the Nuremberg Symphony, which subsequently led to a unanimous vote from both the orchestra and management as their next Chief Conductor, announced in January this year.

2017/2018 Concert Season begins at home with the Singapore Symphony

In accordance with the European summer that begins in August and ends in June, Kah Chun’s 2017/18 season is packed with multiple appearances in various orchestras.

By sheer coincidence, Kahchun opened his personal season with the Singapore Symphony Orchestra on 25 August this year. This marks his first invitation by the SSO since his monumental win at the Mahler Competition.

“I am glad we finally agreed on a common date and that I was able to perform for my country. I’m always happy to be home, especially as its increasingly harder to make time in my calendar,” said Kahchun.

“For my full concert debut, I wanted to perform one of my favourite programmes, and I am thankful for a wonderful management that wholeheartedly supported my artistic ideas. We decided on Tchaikovsky 6th, and then I was introduced to Shai Wosner, the soloist for Beethoven’s Emperor Concerto, who turned out to be a fantastic artistic partner.”

Significant debuts in the cultural capitals of the world

Following his SSO date, Kahchun embarked on a whirlwind tour of East and West, first assisting his mentor of 9 years, Esa-Pekka Salonen, at the Philharmonia Orchestra in London, in Mahler’s 3rd Symphony which was broadcasted on Facebook Live with the partnership of The Guardian. This was Kahchun’s last training opportunity for a while, as he fully embraced the role of a maestro and embarked on an extended journey of guest conducting, spending week after week in a different city; an experience which he likened to a speed date where musical chemistry between orchestra and conductor is determined in a matter of hours.

Kahchun opened the concert season of the George Enescu Philharmonic in Bucharest (National Orchestra of Romania) before making his Italian debut at the Teatro lirico Giuseppe Verdi di Trieste, and then heading to the Bamberg Symphony for two concerts in Southern Germany.

After a quick detour in Singapore to accept the honours of the Young Artist Award from Minister Grace Fu and President Halimah Yaacob at the Istana, Kahchun immediately returned to Germany for his debut with the Konzerthausorchester Berlin on 31 October, which marked the 500th Anniversary of Reformation Day. 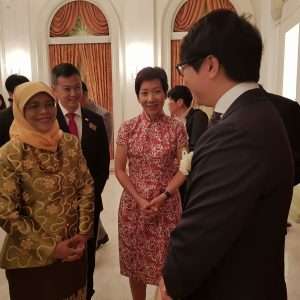 The programme in Berlin meant a lot to him, as he was able to connect to his roots as a trumpet player and invite Simon Höfele for Arutunian’s Concerto for Trumpet, alongside the love scene from Puccini’s La Boheme and Stravinsky’s Firebird Suite; all pieces of music which Kahchun knew from the inside out.

Immediately after Berlin, Kahchun flew to Taipei for his Taiwanese debut with the National Symphony Orchestra of Taiwan and star Baritone Thomas Hampson with a full Mahler Programme – selections from Des Knaben Wunderhorn and his 1st Symphony.

“I have been really lucky so far to have worked with amazing partners, and they all have something in common – a trust in the conductor and the orchestra, and always listening and shaping the music together, like in a chamber performance. Sometimes, I discover a certain soloist for whom we have a close affinity musically and spiritually together, and these are the ones that I look forward to building relationships for future projects.

Again, after a week in Asia, Kahchun flew back to Europe, this time to France, for his debut with the Orchestre national du Capitole de Toulouse, before rehearsing with the Nuremberg Symphony in preparation for their tour to China at the beginning of December. Other important highlights in Europe include his debuts with the Czech Philharmonic and in Spain with the Valencia Orchestra.

In December, Kahchun will lead 5 concerts with the Nuremberg Symphony in Beijing, Shanghai, Shenzhen, Xi’An and Changsha. His calendar immediately connects with two more weeks in China, this time in a different capacity as a guest conductor with the Kunming Symphony and Shanghai Symphony. In June next year, he will also return to the China Philharmonic and make his debut with the Shenzhen Symphony.

“I value my friendship with the visionaries in the Chinese musical scene, and it is my honour to be part of China’s artistic growth.”

Kahchun is also highly in demand in Japan, having conducted very successful concerts with the Kansai Philharmonic, New Japan Philharmonic, Tokyo Philharmonic and Kanagawa Philharmonic the past season. In May next year, he will spend a week each with the Tokyo Symphony, Osaka Symphony and Kyushu Symphony.

Even with a schedule that any young conductor would be envious of, Kahchun remains humble and grounded.

“I am just grateful for all these opportunities, which I see as the trust my musical friends place on my shoulders. Every single concert counts and contributes to my musical journey, and they also help me to become a better person.”