Choosing An Oboe Reed in Singapore The mystery of oboe reeds has been a baffling subject to the oboists and non-oboists alike. Among many issues, choosing oboe reeds is one of the most frustrating issues. They are costly, they are volatile, and they are easily damaged. During purchase, reeds have many types of brands and hardness that make no sense to anyone. After purchase, students complain his reed changes and now it is not playable.

In this article, I hope to provide some practical help. Hopefully readers’ questions will be answered through this article.

Before going down to the shop, it is useful to understand some of the terms. There are two types of oboe reeds, mostly the European scrape (Includes the U-shape and W-shape) and some American scrape (a long scrape from the tip of the reed to the thread). You can google the terms for the pictures. In Singapore, most oboists are European trained, so if you want to find an oboe teacher in Singapore or if you want your reed adjusted, I advise a European scrape.

If you a see a copper wire around the reed, these are wired reeds. Wire helps to stabilize the opening and so lesser strength is needed. But with any wire, it stifles the vibration, so it does not feel as free as non-wired reeds. We will discuss more about this later. In Singapore, most American reeds sold are non-wired and most European reeds are sold wired.

It is important to realize every reed is different. It is like wine – the produce of harvest differs from batch to batch. Under a same brand, it only means the origins and the manufacturing process of the reed is similar, but every cane is still different. Hence it is important to try all the reeds, even when the brand is the same.

I tabulated a list of common brands below, it is not an exhaustive list. They reflect my personal opinions and some trusted oboists in Singapore, but they may still differ from individual. The variants of each brand, such as ‘artist’, ‘professional’ do not affect the traits of the brand too much – I believe the more expensive ones are choice selected canes by the makers. Still that doesn’t guarantee a better reed to the user.

One can safely conclude there is no perfect reed. Important is to find the fit. Handmade reeds or machine made reeds are not important factors, since most processes are done by machine these days. For the first 4 brands, they are obtainable from Musicgear (Aljunied) and Band world@Esplanade if reeds are in stock; KGE reeds are also obtainable from Music360 (Tampines area) and Jones reeds are also available in Accent (West). Elaine’s and Pan Yun’s reeds can be bought from them personally.

Try to get reeds from places that allow testing. To prepare the reed, 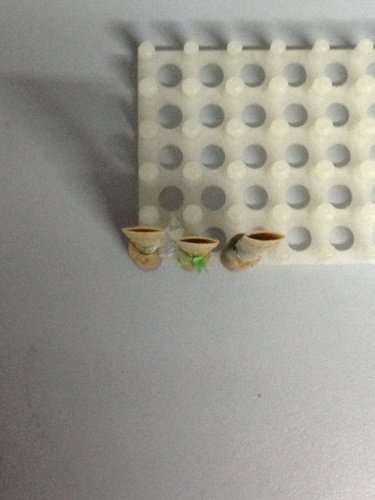 Regarding (1), Most rehearsal venues and concert halls in Singapore is air-conditioned with relative humidity about 60%. Trying the reed in an air-conditioned place ensure the reed feels similar in rehearsals/concerts.

Regarding (2) & (3), some prefer to soak the reed longer in water. Unless there is a good reason to wet the reed, I do not recommend this. Firstly, oboe reeds by default are in a semi-moist state, either in a mouth or out of a mouth. Secondly, oboe reeds will swell up overly when soaked in water, making some reeds harder to play. If so, squeezing the opening might not help enough to rectify the situation. (For Nodame Cantabile watchers, this is the reason why the oboist can’t perform when he forgot to take out the reed from the glass)

Regarding (4), the opening of the reed controls the hardness factor considerably. Refer to picture. Reeds that are ‘too open’ (right) will not work. Conversely, if the reed is “too close” (left), when it dries up, the reed will close up completely. An ideal size is the middle example when wet, then upon drying in air condition room, it should feel just nice.

Soft reed users might want to squeeze a little more than the middle example. (Many has mistaken hard reeds with opened reeds. Some reeds will feel perfect with a little more squeezing of the opening.)

Regarding (5), reeds with rich thick sound often cause tonguing to slow down; reeds with easy low notes often means high notes are difficult. Hence it is important to check intonation and tonguing for the full range of oboe.

For younger players, I recommend using reeds with wire first. The wire acts as an opening control.

Be very careful with the tip of the reed. The tip is thinner than paper and is damaged easily. Once damaged, the reed response and the sound will be greatly affected. Also be careful with splitting the reed when squeezing.

It is usual to need adjustments after purchasing a reed. Reed does change a little upon playing. Consult the shop owner on someone who adjusts reeds. If possible, let the maker of the reed adjust the reed.

Feel free to drop me any question you might have.