5 Differences about Japan and Singapore Contests The Singapore International Band Festival (SIBF) was held from 21 to 27 July last year. The competition is held every two years and it is the 4th time being organized in 2014. I was one of the seven adjudicators in this competition.

I have examined a lot of competitions of Japan before, but it was the first time experiencing the competition in a foreign country. In this article, I hope to share my observations in SIBF that are different from the All Japan Band Contest.

I was surprised that a meeting for adjudicators was held a day before the competition. In Japan, we sometimes have a dinner party, but never was there a jury meeting. During this meet, we discussed the marking system and what we are looking for in the competition. The meeting ensured that each of us are clear about the marking criteria, and it also gave me a clearer picture of what to expect from the competition. One interesting fact is that all the scores of the set pieces and choice pieces were prepared prehand for the jury panel. I thought this is very well thought out as I can make my comments for each piece in the comment sheet. In comparison to Japan, the set pieces are prepared, but not the choice pieces, so it is harder for me to refer to the scores to write my comments.

The rule of performance time is very different between the two countries. In Japan, the Section A contest time is less than 12 minutes, while the Section B contest time is less than 7 minutes. When a band exceeds the time limit, the band is disqualified. In this contest however, a band that exceeds the timing only gets its points deducted. I feel that this is more beneficial for the students from an educational standpoint. Me doing a Workshop

In Japan, the participation of professional musicians in bands is not accepted under any circumstances. However, in SIBF, only the open section allowed for that.

In my opinion, the contest rules and regulations were thought out well. One of the better events in the festival was that the members of the jury were arranged to hold workshops for bands during the festival period. I felt that was very beneficial for the musicians themselves.

I would like to take this opportunity to thank the sponsors, volunteers, conductors and players especially, who have played for an excellent performance. 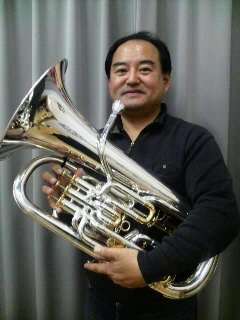 He performs regularly as solo euphoniumist with the Tokyo Brass Society and Euphonium-Tuba Company.