Growing the Legacy of TK Band Under the leadership of their Band-mistress, Ms Irene Joseph, TK band grew by leaps and bounds. By 1972, it won its first Mace of Honour, an award given only to the top three school bands each year. Throughout the 1980s, the band continued its winning form on both the concert stage and in many outdoor competitions.

When the band split in 1989, with TKGS going its own way, Ms Joseph continued to lead the TK Band until she retired in 1992. Ms Joseph left behind an band with a rich legacy, and a cohort of very inspired alumni to carry on her work.

TBP: What was it like after Ms Joseph left?

LS: It was a difficult period because everyone was working. There was nobody to help on weekdays, and we had to find Mr Hashim, who was also the conductor of Bowen band at that time. Eventually, it did not work out because it was tedious to run two display bands at the same time.

After he left, a bunch of younger alumni came together to help out. I led the team for a while because someone had to be at the front. We also had another alumni Swee15On who volunteered his time, but he only stayed for a short stint.

LMK: No alumni could do full time; everyone was working or they had a family. No one was able to devote their time to the band except two housewives (me and another alumni) who could play nanny to the students.

LS: The alumni team was planning everything from the formations, to training drum majors and to teaching drills. Outdoor training was no feat for one person and it required a team of people to help out.

In the late 90s, the marching show required more elements such as props. Our vice principal was very supportive – he was a D&T teacher and had a workshop for us to use. I remembered he was involved in our preparations when we had to make our own canons for our 1812 overture show.

JN: When Lawrence asked me to take up the band in 2008, it was a stressful decision for me. It was also during that time that display bands switched from the old familiar British style to the new DCI format.

The decision to change style was painful too. We had to weigh between keeping our tradition and moving on. It was hard to decide but we eventually felt that if we were to be competing on an international level, we had to adapt accordingly.

None of us knew anything about DCI, and we had to enlist external assistance to guide our learning. We eventually made it work in 2012 when we did a full DCI show with a great result.

LS: The transition was a hard period for everyone. We were losing steam, and there were so many challenges. Unlike in the past, we were not able to have many Saturday practices due to new protocols.

With such struggles, it becomes heavy on the conductor’s shoulders, because what if he or she cannot deliver after so many months of hard work?

LMK: It was indeed a stressful period for everyone involved but I am glad we pulled through together.

TBP: How do you feel that you have been a part of this legacy?

GL: 50 years is a long time. I only spent 4 years here but felt that I did my part as a member. 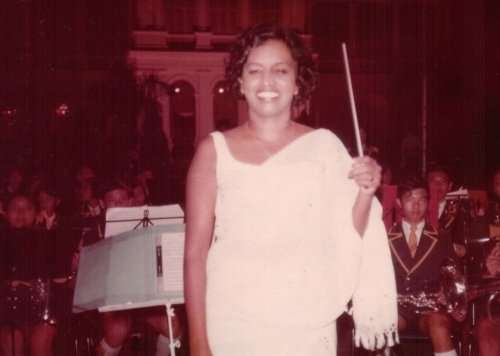 TK Band with Ms Irene Joseph at the Istana

JN: Gaius is currently studying music composition in the States now, and in his batch, we produced two aspiring composers (the other being Derek). I think that is what we want to do here, to let students take up music and grow their interest. We also want to see our students develop a strong character.

LMK: It is all about the values we inculcated as part of the band. The qualities of leadership and discipline stay with us through life.

LS: When our students go for DSA, word is that TK band members are overachievers. We are happy that our students are accepted by the school. Perhaps they are not that skillful in playing because they spent a lot of time marching, but it was still good to hear the students go far.

TBP: How do you feel TK Band has shaped you to become the person you are now?

GL: When I was in the band, we lost a lot, but it taught me how to be resilient.

JN: This was the batch I felt closest to because we went through a lot of bad times together. When we got Silver for indoor in 2011, I thought to myself that I should stop doing this. The students however gave me a lot of support, and they gave me strength not to give up.

With their continuous encouragement even after they graduated, we achieved the Gold with Honours award in 2012 and it was a huge relief for us. I think without this batch of people, I wouldn’t be able to carry on my work with TK Band.

LS: I think TK is like a family. Preparing for the competition is not a band event but a whole school event. The NCC will help us with the props; the Dance clubs will assist as Colour Guards; and the Choir members will undergo training to become side conductors or pit percussionists.

We will always call for people, and the entire student body will respond. Recently, we even had the students from the Drama club to act. It is like a school culture now.

JN: One of the principals used to say that the school culture revolves around the band itself. The school expects band members to be role models to the rest of the school body, and we are always trying to cultivate the right values into our students.

LMK: At each competition, we are so thankful for everyone who came back. Not just alumni and we have parents too. There are even principals who will go down to the field who will assist us, with ranks all aside.

TBP: What are your dreams for TK Band? LMK: Obviously I wish that the national birth rates increase so that the marching band scene can grow in numbers. Hopefully, TK Band can go on for more years.

It doesn’t matter how many students we have, but what we want is that students graduate and become good people in the society.

As for the band, it should continue to evolve in music and marching. Hopefully we can inspire the band movement and not just our juniors.

LS: My greatest hope is that we have more alumni to come back and train our students.

LMK: I came from TKGS and I really enjoyed the partnership between TK and TKGS under Ms Joseph’s time. When TKGS initiated the split in 1992, it was a big blow to Ms Joseph as she wanted this to continue. I do secretly hope that both schools will merge back into a combined band once again.

GL: As a TK band member, you may think that you are insignificant, but you are actually part of the legacy in the making.

LMK: Yes! We must always know that every band member has a part to play. Each of us is important.

Read the first part of the series here