Award-winning Clarinetist John Bruce Yeh from the Chicago Symphony Orchestra is in Singapore to work with the Singapore Wind Symphony (SWS) for the concert this coming Sunday.

The Band Post spoke to him at the rehearsal yesterday about his stay so far, his thoughts about working with a wind band, and tips for clarinet players!

JBY: Yeah, it is my very first time in Singapore. I liked it so far, very much. I have been here for almost 24 hours and I immediately took a liking to it . I had a really nice day today; I took a walk down to the harbour and it is just really beautiful and relaxed, but quite hot and humid outside. If I go outside for a few minutes or an hour or so in the hot weather, I’ll just come back inside and cool off. And then I get cold again and go outside to get warmed up.

TBP: Who coordinated you to come to Singapore?

JBY: It was Adrian Tan. Adrian was the one to send out the invitation and it took awhile to figure out when I could come, because my schedule is very challenging. I am playing full time with the Chicago Symphony, so when there are any opportunities I can say yes to, I have to fit in to the Chicago Symphony’s schedule which is quite full already. Luckily I was able to get this one week period and I am happy that it worked out.

TBP: How excited are you to be here with the Singapore Wind Symphony?

JBY: Oh! I am very excited! And especially to be doing a world premiere of a piece written by one of your local composers, Benjamin Yeo. And to do a classical piece, the Weber’s Concertino and then to do a full scaled concerto with the wind symphony by Michael Daugherty – “Brooklyn Bridge”, which I have also recorded before. It is great to be able to play three different kinds of music with the band and also to work with the local musicians, which I am very much looking forward to. 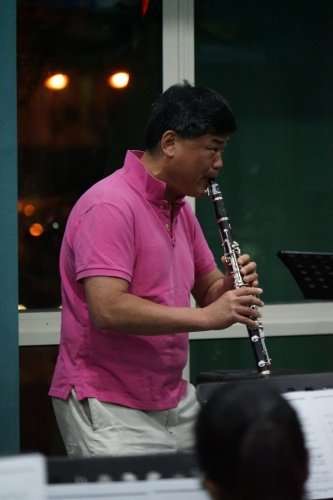 TBP: Is it one of the rare times where you could work with a band because most of the times, you would be working with CSO or orchestras?

JBY: That’s true, because there is relatively little repertoire for clarinet solo with wind bands. I would say there is more repertoire with full Symphony Orchestra rather than with Wind Symphony, despite the fact that we are creating the repertoire every year with wind symphonies, where I have also recorded quite a bit of it.

I have recorded pieces with Wind Ensembles, Jazz Ensembles and my recordings of Artie Shaw Concerto and the Victor Babin’s Variations. Also on my other recording, Synergy, there is “Brooklyn Bridge” which I played with Orchestra and another piece by McAllister, called “Black Dog” which is another solo piece with Wind Ensemble.

Also, my daughter and I, recorded Michael Burritt’s “Duo Concertante”, for Clarinet & Percussion and Wind Ensemble. That is one of the pieces that we thought of doing here in fact, bringing my daughter with me. And then another piece on the album, is composed for me and my wife, who is also a clarinetist, is composed by Jim David, which is instrumented for Clarinet, Basset horn and wind ensemble.

TBP: With regards to the music that you are doing with the SWS, did you choose them or was it pre-arranged?

JBY: It was discussed with Adrian. We thought that there is not that much music for clarinet and wind band, and we should take one of the bigger pieces that is specially written for Clarinet and Wind Ensemble. which is Daugherty’s “Brooklyn Bridge”. That is a full 4 movement concerto, and we agreed on that one. Well, we have to play a classical piece that everyone knows, and that came to be the Weber’s Concertino as it has a wind ensemble transcription. Adrian suggested that Benjamin will write a piece for us to play and I thought it is a great idea.

TBP: So you have seen his piece (ChopSuey!)?

JBY: Yes, it is quite challenging. Benjamin himself is not a clarinet player so he has written some things that aren’t particularly convenient to play on the clarinet. Certainly, it has been challenging and fun to work on so we will see how it goes. I think it will be a lot of fun for the audience to hear.

TBP: The concert is on this Sunday and a clarinet day on Saturday, which is specially arranged because you are here; how excited are you to be able to share knowledge with the clarinetists in Singapore?

JBY: I am excited to be part of the events to share with the clarinetists in Singapore and I have been in touch with some of them through the Internet, Facebook for example. I would like to hear how the local musicians play and maybe give my suggestions on how to make their performances better if possible. I was in Taipei, Japan and China, and basically I gave masterclasses in those places. The level of playing in Asia for clarinet is actually very high and I am incredibly impressed. There are teachers that have prepared these young students with very good training, and a lot of them have studied either in Europe or America, and have brought some of the European or American traditions back to their students. I am hoping the level in Singapore is also as high.

TBP: What are your practice routines like? Do you practice everyday for long hours?

JBY: I practice everyday but not long hours. Sometimes very short, but you have to just focus on difficult spots. I try not to practice easy things but practice things that are difficult which need to be improved all the time. I always need to improve on simple things like one interval connections. *Sings a major 6th interval* Sometimes I practice one simple interval or some passages that need to be more smoother and connected.

My recommendation is to practice the more difficult things and practicing through to get the overall view. Practice must be smart, practice must be efficient and playing must be efficient. You do not want to waste a lot of energy playing and making motions that do not contribute to the music. These are all little pieces of advice and when I hear the individuals, I will specifically point out to them.

TBP: To end off, do you have any advices for young clarinetists?

JBY: I do! I tell all young instrumentalists, that they should try singing. The human voice is the most original instrument and we should always make our playing on the instruments sound like singing. Sometimes when you play on your instrument, the instrument does not produce immediately a sound like a singing voice. It can sometimes produce a mechanical sound or a sound that is anti-musical. You have to really have a good singing imagination and you have to know what it sounds like when you sing a melody or a passage. And then make it sound like that when you play the instrument.

The number one thing is to have the imagination of how something sounds like when you sing it, so that it is natural. The main mechanism is to make it come out sounding like that on the instrument, which takes technique to do that. You have to be very accomplished on technique to make a good sound, articulation, legato and all different kinds of other elements to make it sound just like you are singing.