Douglas Bostock is the current Music Director of the Argovia Philharmonic in Switzerland. He is also Guest Professor in the conducting and opera faculties at the Tokyo University of the Arts, and Visiting Professor at Senzoku Gakuen College of Music in Japan. In his career, he was Music Director and Principal Conductor of the Carlsbad Symphony Orchestra in the Czech Republic (1991-1998), the Principal Guest Conductor of the Czech Chamber Philharmonic (1993-2011), the Principal Conductor of the Tokyo Kosei Wind Orchestra (2000-2006), and their Principal Guest Conductor (2006-2010). His repertoire covers a wide range of repertoire from the Baroque to the present day, including all standard works, as well as many rarely performed works, contemporary music and opera.

Douglas Bostock will be in Singapore from 8 to 11 September as visiting maestro for the 2nd Singapore International Conducting Masterclass organized by the Wind Bands Association of Singapore (WBAS). The Band Post speaks to him on his career and his opinions about the conducting world.

This article is the first of the two parts of his extensive interview.

Having conducted and recorded many bands and orchestras in your entire career, what is a typical day like for you in your current job?

There is no typical day. It depends on the work periods of a conductor. I have many intensive periods and free time, and periods in between these two. When I am involved in a concert or recording project, the several rehearsals or sessions a day can involve a lot of score preparation. Between these sessions or after them, I often like to do physical exercises such as swimming or training, or relax in terms of dinner or drinks with friends. It is important that while I am involved in my intensive conducting or teaching work, which allows me to deal directly with students and their needs, I will have to find small periods of time in between for relaxation.

Nowadays, we are often chased by emails and various other media, as compared to 20 or 30 years ago where free time is really free. When my classes or rehearsals end, it is very easy to be on the phone or computer trying to reply emails for personal stuff, future projects, or answering questions from students. I believe it is important to try to step out of that and have some personal space. I like to get up in the early morning to do work, but sometimes I go to bed finding that I did not have any time away from work, or my personal time. At some point, we may pay the price for the intensive slogging.

As a conductor, I often involve myself with score preparations before conducting. What most people see in the conductor is the least percentage of his work. Rehearsals for new pieces need many hours over many weeks, on top of the score preparation process at the desk, or sometimes in the garden. Different projects like concerts or recording sessions require different aspects of preparations, hence, there is no typical day for a conductor. For example in this period, I am at home, but I moved between music stuff, work and personal tasks, such as preparing future programs, working on this interview, and self-management. This is in contrast with what I did last week in Portugal where I had two rehearsals each day and other musical stuffs in between. Thus, I believe that the typical day of a conductor depends on the certain plot of life for that period of time.

Why make the switch to become an opera conductor? Was it more challenging in a way?

I would not say it is a switch, but a different phase in my conducting career. I did opera in the past, but not in a concert style. My professorship at the Tokyo University of Arts was to conduct opera and I have always wanted to do opera but sometimes it was due to a lack of time, opportunity or chance. It was only in recent years that there was more opportunity to do so, especially through the opera festival in Switzerland. I am very happy that I have more chances to do opera in the last few years, allowing me to have diverse work experiences in symphony orchestra, contemporary and opera. This diversity seems to suit me a lot and I hope to continue to expand in newer challenges and ideas.

Name three pieces you enjoyed (or still enjoy) conducting, and why? 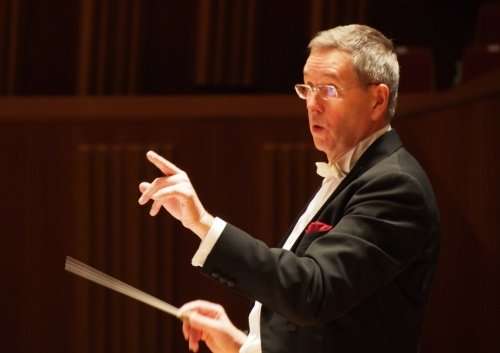 In general, I have a lot in mind. But in the orchestra or wind band scene, it is to pin point favourite pieces because, the favourite piece you have should always be the one you are conducting at that moment. It should not be any different, because ideally we are associated so deeply with it, making it enjoyable for ourselves to conduct at that point.

Nevertheless, if one steps back from conducting activities, it is possible to see the favourite composers or pieces that one favours or suits. I am very pushed to name 3 pieces from the symphony orchestra scene as the repertoire is very wide, but there are some composers that come to mind, such as Mozart, Brahms, Elgar and Sibelius. Sometimes, I do create a list of ten pieces in my mind, in the scenario of being stranded on an island with only these ten pieces to keep me going. This list however, often changes.

In the wind band scene, it is the same situation but slightly easier because the repertoire is not as vast as symphony orchestra. For sure, Percy Grainger’s Lincolnshire Posy will be one of those, as well as either one of Holst’s suites, either 1 or 2. There are also many more that occur to me as well but I cannot pinpoint a certain piece.

I have several outstanding memories in my career,

Would you say you have some influences, or inspiring conductors that you look up to?

I was fortunate as a teenager to have some local music teachers who were also good conductors to teach me. The first conductor who really helped me was Sir Adrian Boult, whom I knew through the various recording projects and was lucky to go for lessons with him in private while in London. I also studied with Professor Dr Francis Travis when I went to do my post graduate in conducting in Germany. They were completely different conducting traditions, but the influences on me were some kind of a synthesis. There were also many great conductors such as Sir Thomas Beecham, and even wonderful musicians, soloists and singers, who have influenced me greatly in forming the musician and conductor I am today.