Pursuing an orchestral adventure that began at 7, from practising the cornet to composing and conducting on the international podium.

When local musician Kahchun Wong is not busy at home conducting the Singapore Symphony Orchestra (debut at Esplanade Concert Hall: 6 March 2015), composing for the Singapore Chinese Orchestra (commissioned for concert premiere in June 2015), recording with the Royal Belgian Navy Band, working with children (leading the Kids Philharmonic Orchestra in educational performances) or curating performances with the Asian Contemporary Ensemble (NAC Seed Grant 2014-2017), where he is founding Artistic Director, he is engaged as a guest conductor by a variety of top professional orchestras around the world, so diverse that he has performed in no less than 20 cities, from Berlin to Vienna, St.Petersburg to Moscow, Atlanta to Santa Cruz, Croatia to Romania, and Mexico to Argentina. This, coupled with his youth and Asian heritage, is a rare accomplishment for any international conductor under the age of 30.

In 2007, Wong was awarded a full scholarship to the Yong Siew Toh Conservatory of Music (YSTCM), majoring in composition, after an intensive two-year period of studying harmony with Phoon Yew Tien during his National Service rest days. 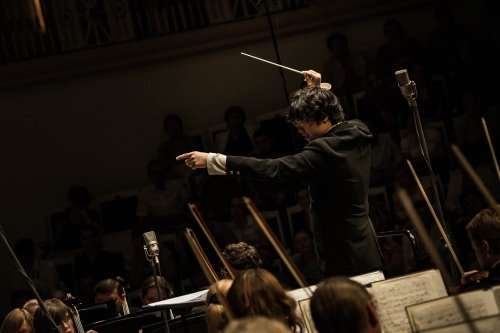 His composition professor Ho Chee Kong, as well as the director of music, Bernard Lanskey, fully supported his dual interests in composition and conducting, and his earliest conducting lessons came from Wang Ya-Hui, who patiently guided him through the scores of Beethoven and Mozart.

In 2008, he was chosen by YSTCM as an active participant of Esa-Pekka Salonen’s conducting masterclass at the Esplanade Concert Hall, where he made such a positive impression that he was subsequently invited and advanced to the finals for the position of assistant conductor to Salonen at the Philharmonia Orchestra in 2010. On graduation, he was immediately offered a 2-year conducting assistantship with the Singapore Chinese Orchestra, which included close mentorship by Yeh Tsung, and he benefited deeply from learning about what it meant to lead a local arts organisation, both artistically and administratively. This was a significant milestone, as it was the first time a local conductor with roots in Western Classical Music was engaged by the world-class Singapore Chinese Orchestra for collaborative performances and professional training.

In 2012, he became the first recipient of the Lee Kuan Yew Scholarship (PSC) to pursue graduate studies in the field of arts and culture, while concurrently on an NAC Overseas Scholarship, working towards a Master of Music at the prestigious Hanns-Eisler Musikhochschule in Berlin, Germany.

In 2015, notable local engagements include his professional debut with the Singapore Symphony Orchestra, as well as writing a composition to be premiered by the Singapore Chinese Orchestra, becoming the first local musician to have conducted both national orchestras in subscription performances. 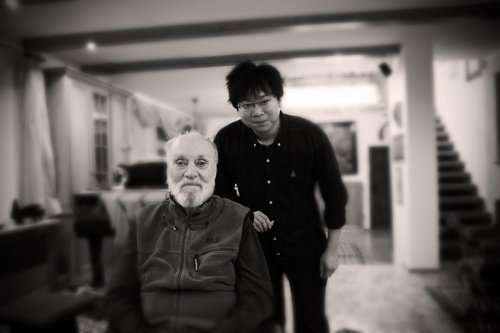 With Kurt Masur in his Leipzig home, September 2013

The study of music is an endless journey, and Wong knows it personally from his own experiences of regularly participating in high-profile conducting masterclasses with the world’s most sought-after maestros. Each of these events are a major competition in itself: usually only 3-6 students are selected from hundreds of applications, and these active participants must be at their best every single session, or expect to face further elimination. 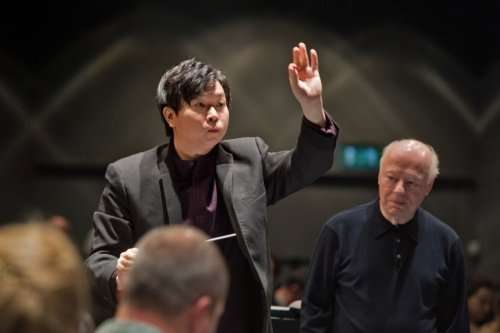 In 2012, Wong was handpicked by Kurt Masur (former Chief Conductor of the Leipzig Gewandhaus Orchestra and the New York Philharmonic) to study with him in 5 international conducting masterclasses, sharing the podium each time in a public concert, a privilege no other conductor has ever received till today.

In 2012 and 2014, Wong was selected to study with Bernard Haitink (former Principal Conductor of the London Symphony Orchestra and the Royal Concertgebouw Orchestra) at the Lucerne Easter Festival, where he got the opportunity to conduct the world-class Lucerne Festival Strings.

Wong understands that the role of a conductor is more than simply being an outstanding musician, and his active contributions in bridging and connecting the various fields of arts and culture, especially championing Singaporean musicians, can be observed in his work in cultural diplomacy in the past year. With the First Lady of Thailand, Associate Professor Naraporn Chan-ocha at the ASEAN International Symposium on 12 September 2014

From 8-13 September 2014, on nomination by the National Arts Council, Wong represented Singapore at the ASEAN International Symposium “Classical Music in the Context of ASEAN” organised by the Ministry of Culture, Thailand, and led a presentation on Singapore’s cultural heritage, alongside music experts from our neighbouring countries.

From 5-12 October 2014, Wong was engaged by the Vietnam National Musicians Association to conduct 2 programmes at the 1st Asian-Europe New Music Festival.

In one concert, he performed Singaporean composer Ho Chee Kong’s work “Shades of Oil Lamps”, originally commissioned for the Singapore Arts Festival, and in the second concert, he presented Singaporean violinist Loh Jun Hong as a soloist for a special programme supported by the Japan-American Institute of New Music (JAINM). With Minister of Culture, Community and Youth, Mr. Lawrence Wong, on 12 November 2014

On 12 November 2014, Wong conducted a performance with the Asian Contemporary Ensemble (ACE), a local arts group supported by the NAC Seed Grant Scheme from 2014-2017, at the annual Stakeholders Appreciation Event, organised by the Ministry of Culture, Community and Youth in Singapore.

ACE is a ground-breaking outfit, made up of local prize-winning musicians performing on ethnic instruments representing the four major communities in Singapore, with a vision to inspire, share and explore the rich multicultural and cosmopolitan identity of Singapore and the Southeast Asian region through music.

As a composer, Wong’s works for wind orchestra are published by Tierolffmuzieke Centrale (the Netherlands), and regularly performed by bands worldwide, such as the Royal Belgian Marines Band, the German Youth Wind Orchestra, the Peabody Wind Ensemble, and the Singapore Wind Symphony. In 2009 and 2010, he was commissioned by the CMF International Concours (France) and the 9th International Band Contest in Italy to write set pieces for the Superior Divisions, and as part of Philharmonic Winds’ 10th Anniversary, “Krakatoa” was composed, which was subsequently selected on tour to the World Association of Symphonic Bands and Ensembles (WASBE) Conference in Taiwan. “Krakatoa” became the first-ever wind orchestra work to successfully be transcribed for Chinese Orchestra, performed by the Singapore Chinese Orchestra and the Taipei Chinese Orchestra in sold-out concerts. In 2012, the Hageland Wind Orchestra of Belgium made the first recording of “Vox Stellarum Symphony”, a multi-movement work that was first composed when Wong was 17.

Wong first played the cornet in the Jurong Primary School Brass Band at 7, led by Miss Yue Ai Chuan, and then progressed to the trumpet in the River Valley High School Concert Band, where he served as Band Major and Student Conductor, mentored by Miss Chan Peck Suan. During his time as the student Music Director of the Raffles Junior College Symphonic Band, he was further inspired by Mr. Takehiro Oura, and was encouraged to join the Singapore National Youth Orchestra, where he first came into contact with the vast repertoire of the symphony orchestra. As a member of the Singapore Armed Forces Band, he was guided by the Director of Music ME5 Tan Aik Kee, who motivated him to compose marches and serious music for wind orchestras, which has led to a relationship with Tierolffmuzieke Centrale, a publishing house in the Netherlands, where more than 10 compositions has been published and recorded.

This article is originally written by a Berlin Journalist, Andreas Baum, on 17 January 2015, about Kahchun Wong’s development as a conductor and composer.