Good Old Times Band or G.O.T Band in short, came together on 11 January, as old friends gathered on stage to revisit familiar tunes and exciting music together.

The sold out concert was a homecoming event and a celebration of reunion among family, friends and teachers, who have showed their dedicated support towards the musicians throughout their individual band journeys.

“GOT Band is a gathering of friends wanting to make music together. GOT stands for Good Old Times, signifying the good times we spent together in the past making music, not necessarily with one another, but just having a good time making music,” said Ian Lum, conductor.

The concert is stemmed from months of hard planning and rehearsals in the old NUS rehearsal auditorium.

“The rehearsal room, for many of us, was a place where we could shelter ourselves from all the stress from school, and later, life. It was like a second home as we could hide in it, and immerse ourselves in the music-making, while the world’s worries pass us by. Music-making for us was like ‘home’,” reflected Ian. 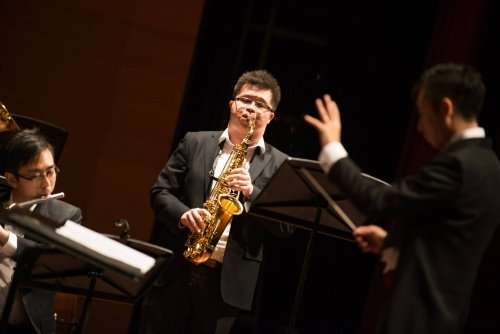 “I remembered the time when we stepped into the auditorium for our first rehearsal. It brought back a lot of memories; happy, sad, funny, angry, musical and non-musical moments from our previous years rehearsing in the very same room,” recalled Han Zheguang.

“Most of us are in different phases of our lives now compared to the undergraduate days, but yet we still miss our 2nd home (and for some of us, 3rd). Of course, ‘home’ can literally refer to the auditorium, or figuratively the music making group and the music itself. But on a whole, we have definitely missed our good old times in band and through this project we can revisit them once more,” he continued.

Featured in the concert were familiar wind band arrangements such as ‘The Phantom of the Opera’ and ‘I Need to be in Love’ featuring Goh Wee Juay on the alto saxophone. The second half also saw the renditions of Teresa Teng‘s ‘Good Bye My Love’ and ‘I Only Care About You’, as well as Liang Wern Fook‘s 细水长流 (Friendship Forever). The concert then closed with 那些年 (Those Years), from the popular Taiwanese romance film “You Are the Apple of My Eye’, allowing the musicians to reminisce their good old years in the band.

When asked about the possible continuity of the project, Ian remained doubtful, “This project was envisioned as a one-off project, and for many of us, it was the last time we could make music together on such a scale. We do not know if we can pull it off again, so that remains to be seen.”

“Personally, the project represents a chance to bid farewell to this significant part of my life as I will be “retiring” from performing music, among a few others as well. It is probably an apt closure to what I have been doing for so many years and it actually felt like my family and friends came to send off my beloved with me,” said Zheguang, who invited many of his family and friends to the concert so as to share the music with them.

“I am really glad to have participated in this project. It was good while it lasted, this farewell.”