Providing good entertainment has always been one of Sin’s aims,  who continued to be very involved in ensembles after his tenure from his professional career with the Singapore Armed Forces Central Band in 2010. 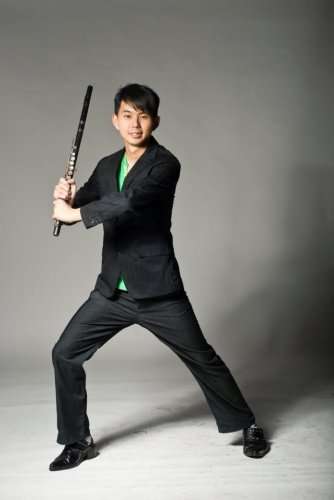 Sin Jin How, is a passionate individual with a myriad of talents; he is a flute teacher, a freelance musician and a composer / arranger with FG Entertainment.

“I feel strongly to speak up and do my part as a Singapore musician. That is why I am always trying to promote Singapore music and the musicians in my projects”, said Sin, when asked about his direction.

FG Entertainment has been very active over the past few years, providing regular “feel-good” entertainment to the general public, with performances ranging from small trio ensembles such as the “A Flutey Affair” and “Kreutzer Ensemble” to larger ensembles – “Project W”. These projects have a variety of concepts, and some are planned for certain groups of people such as children and senior citizens.

“I am always trying to be creative and be as original as possible by trying out varied instrumentations for projects. I have to put a lot of thoughts into the projects that I plan to do or experiment with. It is quite stressful at times as I have to ensure that I am responsible for the final product; so every decision I make on song choices, I have to think it through. I am lucky to have a great group of musician friends to help me.”

For Sin, it was a very fruitful 2014 with several firsts in the musical groups, Project W made its debut at the Esplanade outdoor theatre in April; A Flutey Affair, did a series of well received outreach performances at libraries and a performance for ESM Goh Chok Tong, while Kreutzer Ensemble performed in October at the Esplanade.

When asked about a memorable project, he quickly related to the formation of Project W – a project basis band with a few friends, where he had to work closely with PA to plan a mini concert band for an Istana performance.

“Our first performance was at the Istana and the President stood behind me while we perform one of my arrangements for him. I was very overwhelmed with the President and his huge entourage. It was a big moment for me and it was also my first public performance as a conductor!”

Heading to 2015, Sin shared with us some of the group’s plans for next year.

“I plan to do more charity or educational projects, especially with the less fortunate or under privileged. I hope to continue working with PA to make them more accessible to everyone.” said Sin.

“Although some performing venues are unconventional, the audience often assures us of a lukewarm feeling when they respond to our music. It seems like arts and music are the only languages that people can appreciate universally.” he added.